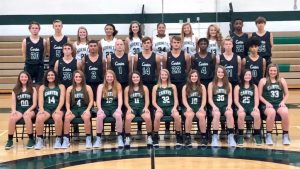 Strawberry Plains, TN – There’s a buzz in the air in Strawberry Plains because the 2018-2019 basketball season is upon us. This season’s Carter Basketball Schedules has the same regular District 3AA competition (Gibbs, Gatlinburg-Pittman, Northview, Pigeon Forge and Union County). Two of our rivals are back on the schedule this season the South-Doyle Cherokees and Austin-East Roadrunners. The Roadrunners come to Carter on Nov. 27 and the Hornets return the favor and travel to AE on Jan. 29. Carter will visit South-Doyle on Nov. 26 and the Cherokees come to the Plains for Senior Night on Feb. 4. The other new opponents are: Clinton, Campbell County, Oakdale and The King’s Academy.

The Carter Hornets are now under the direction of new Head Coach Spencer Beaty, who replaces Aaron Carter, is ready to bring a high energy exciting brand of basketball to the Plains. Last Season’s District Championship team graduated all 5 starters, however the Hornets have several players with valuable varsity experience returning and they’re hungry to defend their title and advance deeper into the postseason.

Coach Bo Lewis enters his 4th season as the head coach of the Lady Hornets. The last 2 seasons Coach Lewis has lead his Lady Hornets to a solid record of 41-19 including a District Championship Game appearance last season and back-to-back Regional Semifinal appearances. This season’s Lady Hornets are a group of hard working, fun loving, and dedicated basketball players that possess the skill and determination to venture into places the Lady Hornets have not been to in decades. Carter graduated Carley Webster, Sarah Irwin and Taylor Webb, but Coach Lewis has several talented young players lurking in the shadows and are ready for their turn.